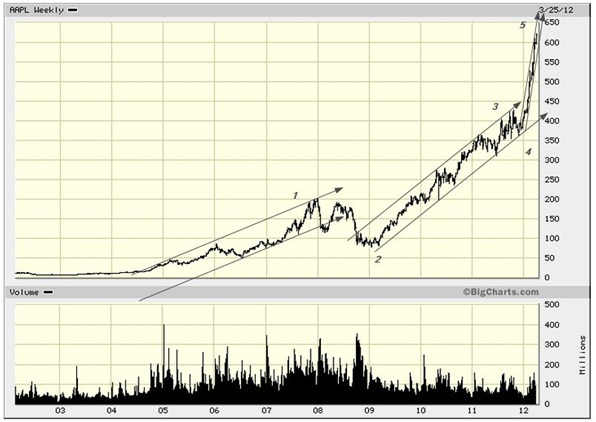 Yesterday, on BNN, there was this fellow who, without batting an eye, estimated that Apple will trade at about $1645 by the end of 2015. Roughly, that is an increase of 3x in another 3 years. If you extrapolate the above chart in a linear manner you will obtain substantially higher levels. According to Bigcharts the stock has a p/e of about 17 but you should not look at that for this stock. More important is the price to earnings which is “really” only running at about 2.5 X and could easily double or more just to catch up with the peer group.What peer group would be a reasonable question since it is a universally accepted fact that this company has no peers. When mathematics or logic enters into the equation you can rest assured that the result is wrong.

From a EW perspective there are possible 5-waves up. The ratio’s between them are roughly 1:1.62:1 a common thing. In the great recession this stock was cut in half and then some. Earlier in the decade it had lost more than 90% of its value. Things happen, they always do. Hold on to the stock by all means, but make sure that you are operating with a tight stop.