This company is not a mine company despite what the name might suggest. They are in the document archiving or destruction (shredding) business and just happened to use an old mine to store things underground. Here are the charts; 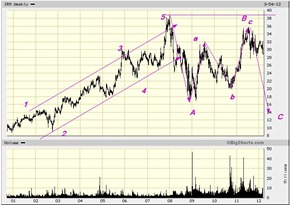 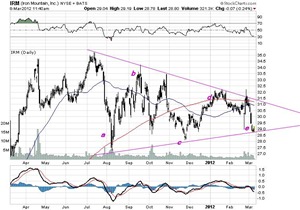 On the left is the long-term chart. It shows an absolutely perfect a-b-c B-wave back up from the lows. This would obviously suggest that the next big move is going to be down in the C-wave. The short-term chart contradicts this conclusion. It shows a plausible triangle which would normally have to be a wave 4, so next we should get wave 5 up which, not surprisingly measures about $8 and therefore would bring the stock to within a single dollar of double topping at $38+. Faced with such a high degree of ambiguity one should be prepared for either outcome. Should the stock drop below $28 and then $27 the outcome should be negative. On the other hand if the stock manages to move above $31.25 a thrust up to $38 should be anticipated. Then it would be a sell/short.

Given the overlap that has already occurred, the only logical alternative bullish scenario that remains, is that we are in a “diagonal”, that is a wedge, wave 5 to a new high. The triangle would be wave 4 in the wedge and the coming “thrust”would be wave 5 of the wedge. The end result would not be much different from this being wave 4 of c of B and the target would be , more or less, identical at around $38+.This is shown in red below; 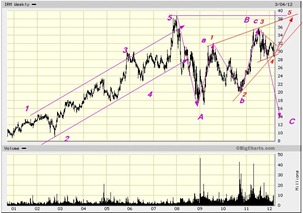