Not everybody is aware of the fact that Wells Fargo, the bank with the stagecoach in its logo, is now the biggest bank in the US. At a capitalization of about $180 bln. it is as large as Bank of America and Citi combined. Like Bank of America (originally) WFC is headquartered in the State of California and could consequently grow organically as this state did not have single-unit bank laws. Citi, better known as FNCB grew to its size thanks to a collection of financial corporations made possible primarily by suspending Glass-Steagall.

Two things stand out. One is that that the first shall be the last. The other is that if you stick to your knitting , either by choice or circumstances, you may do better. Being in a state that does allow multi-unit banking helped growth and provided a solid deposit base. Being in a back-water also helped to resist the temptation to copy the money-centre banks. In Canada we have all these elements which is why the Royal probable best resembles WFC. 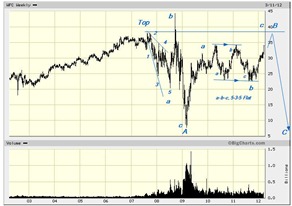 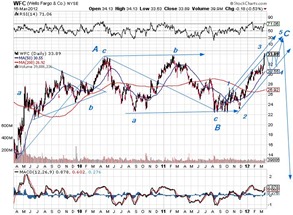 The rebound from the lows has lasted much longer and given the magnitude of the move it was reasonable to assume that the rebound was over. However, with the benefit of hindsight, now that WFC is at the exact same level it was 2 years ago, one must assume that a “flat” occurred as a wave b in the pause part of the rebound. If that is the case the stock could soon make a new high, an irregular top for wave B. This would be at around $38+.

As far as the Royal is concerned, there are a total of 42 entries in this website and following the blogs would have been quite profitable. Nevertheless the two highs just ticks apart and the two 5 wave moves down never did fit so to speak. Here is the updated count; 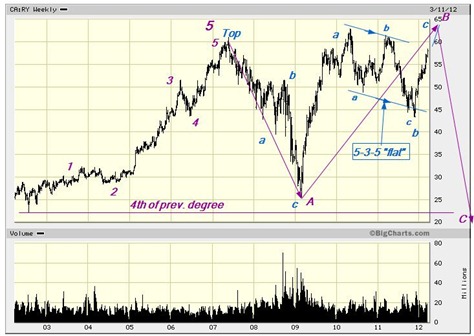 The 1-2, 1-2 possibility is still viable but the above count now looks more plausible. If we assume that  wave c will grow to about 62% of wave a, as is quite common, then a peak at around $65 is a possibility. From a trading perspective it is not a smart thing to buy this stock. It took the stock 50/100 years to get to these levels and just eyeballing the chart tells you that it has not been higher than it is now for more than a few months. If you do own it, it is definitely a sell now or above $60. The next big move, according to EW principles, should be rather nasty as the target is at least the level of the 4th wave of previous degree, around $22.

Your broker will , no doubt, remind you that this stock earns you twice as much as the 10-year government bond does, on top of which it is tax-efficient due to the dividend gross-up. That is entirely true but it is also static rather than dynamic. Should bond yields rise, perhaps dramatically, the banks will be hurt hard and this could happen.