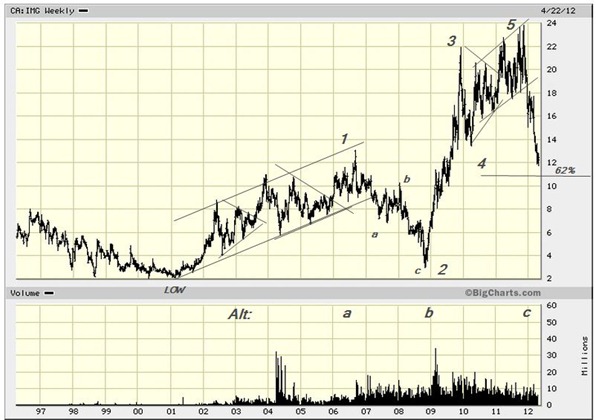 IMG was up 12x in an equal number of years. It started its climb at the same time that gold itself, but also a good number of goldstocks such as Hecla made their lows in early 2001. Most of the gains were made immediately after the great recession when it became obvious to everyone that the provided liquidity (another 5 T Yen worth today by the BOJ) worldwide could only lead to roaring inflation.. This is a very stubborn misconception but the above chart may help to discredit it. Notice that the high of wave 1 at $13, give or take,  has been breached decisively during the past week or more when the stock traded below $12. This either means that the Pavlov dogs do not hear the bell anymore,  that the world has suddenly become a much better place, or the whole theory was bunk to begin with. 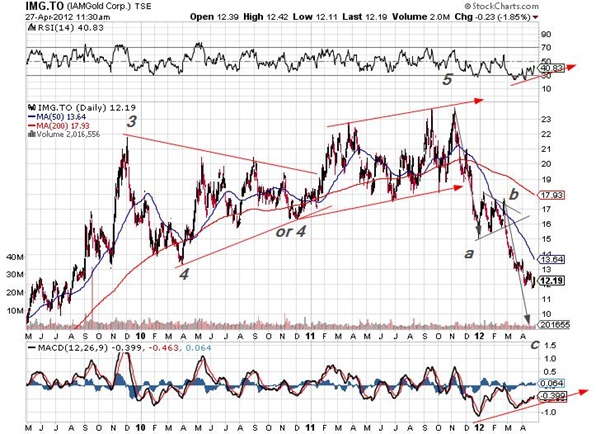 Notice that a “logical” point for the correction would be around $9. Logical because that would be where c=a. It does not have to go that far and probable will not. Both the RSI and MACD seem to indicate that a turnaround could happen any moment. We have no idea where the best buying opportunity might be but in terms of buying low and selling high these levels start making sense. The company has just completed a take-over whereby they added some 400,000 ounces to their production at a cost anticipated to be about $80 an ounce. At todays gold prices that leaves a fair margin for error.