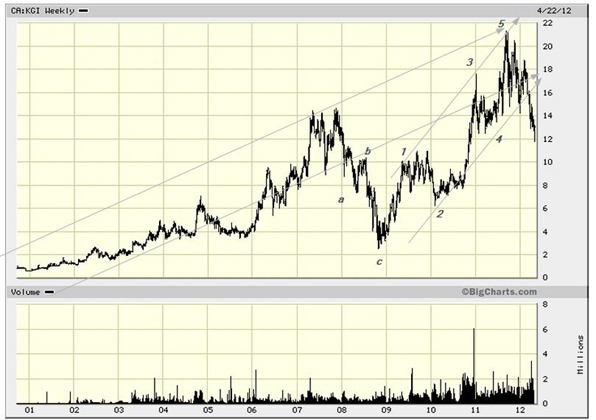 Kinross is another “favourite” stock that has not worked as a calamity hedge and or inflation hedge. It is now trading well below the levels it was at prior to the 2008 financial debacle. During that year, by the way, the stock lost 85% of it’s value despite the implosion of the US financial infrastructure. Now the Europeans are doing their utmost best to upstage the Americans by making their own, arguable, much bigger mess. So far the stock is down roughly 50% , sort of replicating the earlier experience and yet it is impossible to find  more than half a handful of “analysts” that are not absolutely sure that more gold stocks are what is needed.

From an EW perspective, the 50% was well within the range of reasonable expectations, wave 4 is just a little higher and 50/62% is a perfectly normal retracement, regardless of whether one looks at the entire sequence as a single bull move, or starts anew in 2008. In fact in the former case the normal target would be wave 4 of previous degree, in this case at $2.50 or so! Should we trade below about $11 the idea that we are only in a wave 4 with 5 still to come will have to be rejected due to overlap. Should the stock ultimately drop in proportion to the 2008 situation in response to what is going on in Europe it would end up at about  $3. Unthinkable given the present mindset which is exactly why it might happen. First we should get a bounce.