We have been a little bearish on FSLR, First Solar, for the simple reason that we love this stuff but believe that any government involvement kills the whole thing. In the US homeownership was the politically correct story of the day, that is how Fannie May became the largest and most incompetent dealer in derivatives, never mind that most people there knew absolutely nothing about them nor did they need to know if they had stuck to their knitting. America claims to be the land of the free, and with that, raw capitalism. But any and every time something goes awry it reverts back to  a centrally , or dirigistic  type of economy. The Fed is the prime example of constant meddling but it also happens in that new wonder of the world, non conventional energy. From China to the US, from Romania to Hungary, from Denmark to Iceland etc.etc. government subsidies have been available at embarrassingly high levels, often well over 10x what the free market would have dictated. Here is what happens when they come to their senses and abruptly pull the plug; 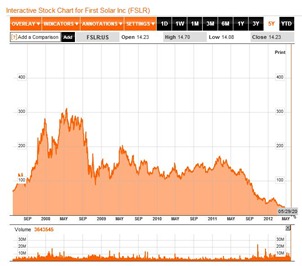 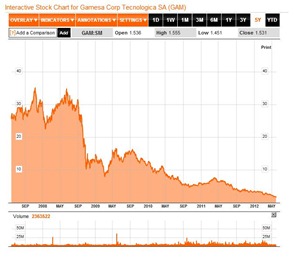 Spain has a problem with empty homes, it also has a problem with renewable energy policies, all this courtesy the government. First they discovery new sliced bread, subsidizes you to the tune of 10x + above the going market rates, completely ignoring how this might fit in the existing infrastructure and then reverse policy. One day the same will happen with interest rates!(see previous blogs on FSLR). Canada is doing exactly the same thing. Not knowing the basic difference between base-load and whatever else happens to be available, our politicians are embarrassed to have to explain why it is that we pay Americans to use our power, an economic concept that does not come across very readily. Never mind the non- tendered deal with Samsung.