If you had a really good broker he/she would not bother you with all the minute little details that can be reported on just about any stock all day long, 95% of which is simple noise. A good broker would take the Less is Better approach and suggest that you invest either in the HXU or the HXD , not both, alternatively. That would cut out all the BS. It would also be unacceptable as it would negate most silly rules and principles adhered to religiously, when it suits, by most practitioners. What it would do is show you if the emperor is wearing any clothes. Most times he /she is not. Here are some updated charts, but also see previous blogs; 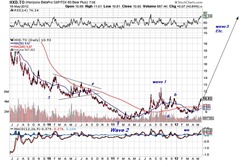 As usual, click to enlarge. This is the HXD, D is for down 2x because this thing is leveraged which is not an added risk provided you keep a comparable amount of money idle (in T-bills). Over time , as the bear market progresses, this one could again trade at $40 or even a lot higher. To see how the HXD trades relative to the HXU, the U is for up, I have created the chart below on Bigcharts , it does not show absolute values so I have inserted them, roughly; 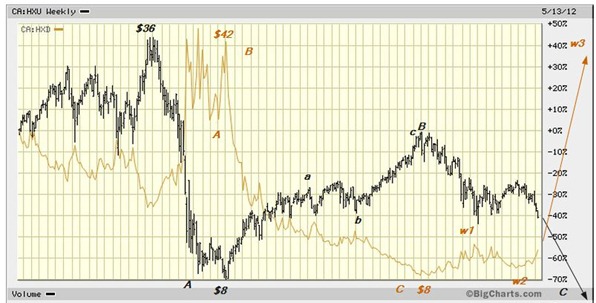 In black is the HXU, which acts like the TSX itself, up or down. Notice that the B-wave retraced a fairly precise 62%.  In light-brown we have the HXD which is the inverse of the HXU or the TSX. Both “track” reasonable well and both have been in a range of about $40 to $8. Soon the two lines might cross once again. The extreme was reached back in March or April of last year. In both the HXD and HXU we should be in the beginnings of a third wave, when the moves are fast and large. Do not count on your broker calling you, we all know the adage about reversing your money and your broker’s experience. And QE3 is just around the corner.

For the record, the HXD is the only stock/etf that I own. I do not normally trade my blogs, it interferes with ones objectivity. By the way , the HXD was recommended back in late Feb. 2011 when it was trading at about $8 and as it is now almost $12 you would be up about 50% for the 14 months. The HNU was recommended big time at $8 just before my departure from DS on Nov 6, 2009. It hit the $8 target purchase price a few months later and then tripled.

Oh, and before I forget , that little sailing boat featured in the brochure (see below), is not yours after you followed all the recommendations, it is your broker’s. 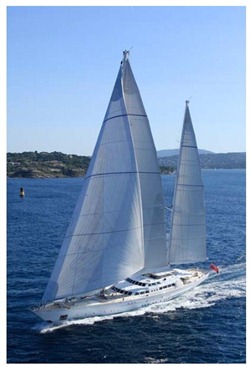