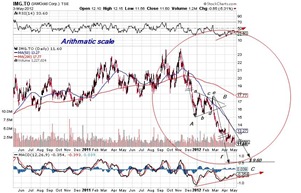 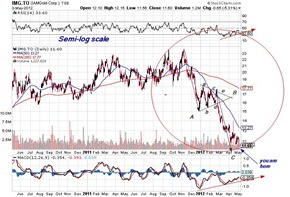 The earlier suggested target (see previous blog) may be too low. The stock is still dropping but equality between the C and A legs of this structure  looks to be more imminent . The two charts are identical except that the one on the left is on a semi-log scale. When stocks move a lot sometimes equality  means equality in proportional and not absolute terms. When this might be so is very much a matter of taste and subjective judgement more than anything else but in this case it may apply. Vector wise the C is almost equal to the A, with perhaps only a few cents to go.  This, by the way, has nothing to do with gold stocks in general. The idiosyncratic properties of many of these stocks are such that one does not necessarily represent the whole. As always click on the charts to enlarge or move them around.

To add to the confusion I have added a “big picture” Bigchart below; 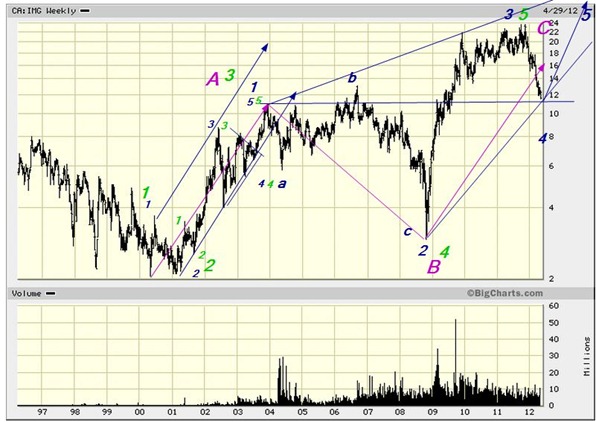 A good prediction should be like a horoscope. It should contain elements of all possible scenarios so the reader can recognize those parts that conform with his/her own thinking. All three are here. The super bull case, in blue, would have the above described structure as a wave 4, which should not overlap (cross the thin blue line). We are close. Alternatively a very large scale wedge is forming that would allow some overlap. The bear case is that a sequence of 5 waves was complete and the present correction should correct the bull move of the past 11 years or so. This may be enough (does not show well on log chart) and then again it may not be enough. The last possibility is that the last 11 years was not a bull move at all and instead was a corrective A-B-C counter trend move (shown in purple). For a while minor moves may run in the same direction, but the ultimate outcome is very different.