On the 15th of June this stock made a low of $1.39, I did not catch it immediately but better a little late than never. Here are the charts; 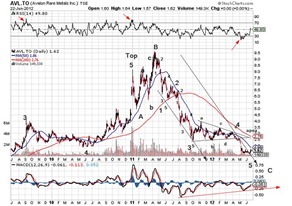 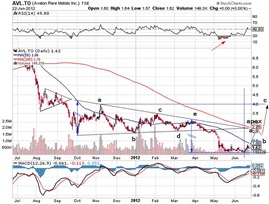 This stock has followed a text-book EW sequence.We are not that concerned about the move up, much of which is not on this chart. Suffice it to say that the top is at about $8 at the start of 2011. The stock then goes higher in a very clear B-wave to make a higher, irregular top. Then it collapses in the C-wave which must always subdivide in five waves. It does and very nicely. To make things even easier we get a very nice triangle, which are always in the 4th wave (or B-wave) position. The triangle itself subdivides clearly in 5 waves, all of which consist of 3 waves. The triangle’s measure (the blue arrow) is precisely equal to the distance travelled in the minor 5th wave. Moreover it makes it’s low right under the apex of the triangle. In the meantime the RSI was oversold and the MACD did not confirm the new lows for quite some time. We can conclude with a great degree of certainty that the entire A-B-C correction was complete at the low of $1.39 on the 15th of June.

Even if a new bull market for this stock has not yet started , we would expect a rebound , retracing all of the 5th wave (where e topped), at about $3. More normal would be the top of the triangle at $4. Consequently, with a high level of probability (say 95+%) this stock will , at the very least, double over the next two months or less.

Fundamentally speaking China is the main producer at present, but they recently showed signs of wanting to keep much of the available stuff to themselves. In the meantime others, like MCP (Molycorp)  and QRM (Quest Rare Minerals) are working on opening new mines and have a roughly similar chart; 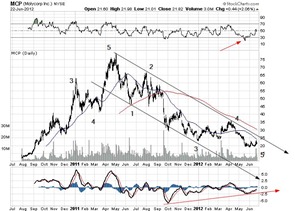 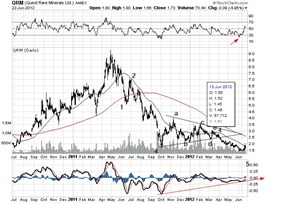 With both these two stocks a better count might actually be a double zig-zag or a-b-c X a-b-c ( not shown) which would also conclude a single correction comparable to AVL but without the irregular top. In the case of QRM the triangle would, in that event, not be a 4th wave but a B-wave in the second a-b-c.