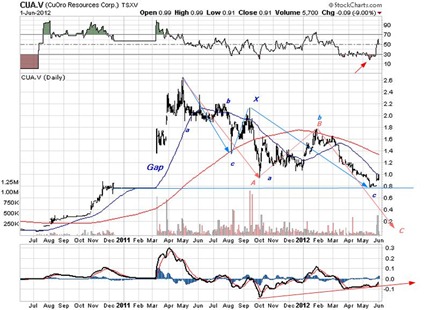 The small chart (see prev. blog) suggested an initial downside target of about $0.80, on the basis of that being a 4th wave of previous degree, perhaps. As it happens that is exactly where the decline stopped but longer term there could be more to go. What we may have had was an a-b-c X a-b-c, in which case the correction may indeed be over. However ,  the larger simple A-B-C may still be operational (in red) in which case the stock could drop a ways further. What did happen is that the gap to the upside was closed. Our remarks concerning the incentives on the part of management having diminished substantially, remain valid. In fact, apart from their own options being underwater, they are in the process of making an agreement with Pacific Road (Sydney , Australia) that among other things calls for the sale of about 20% of the company by way of stock and warrants over the next 5 years. This transaction would be done in two separate parts and might provide as much as $45 mln. to finance the development. How this relates to Hudbay Minerals and their non-dilution agreement is not immediately clear. Their stock dropped from $30 to $7 over the past 4/5 years and they recently cancelled a $400 mln. financing. Even so , in that context $40 mln.  is rather miniscule so why did they not step up to the plate? Too many questions therefore use a tight stop! The deal with the Australians requires stock holder approval, management has about 35% and HBM 14 %, so that should not be a problem.