Ford is different from the others in that it is already in a new bull market without having gone into bankruptcy, even if it did trade below $1. We liked the stock then (see 21 previous blogs) but are not sure lately. 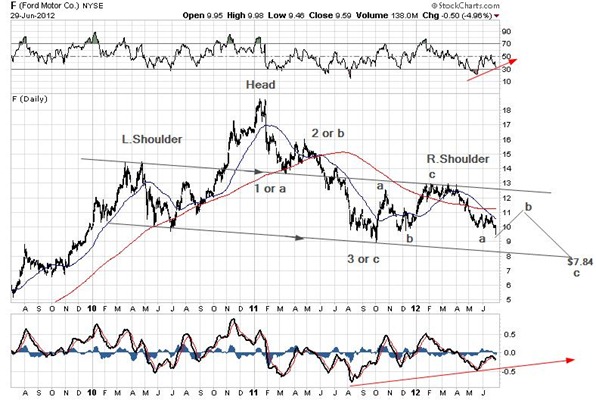 If this is a correction of the move from $1 to $19 it should take the form of a zig-zag, or a double zig-zag. One single zig-zag was complete at the $9 low, however the next move is an a-b-c again suggesting the trend is still down. If so the first leg of that second zig-zag may be complete. If so a rebound to , say, $12 is possible and then another leg (c) . The second zig-zag could end up being about 62% of the first. This is not similar to, but does rhyme with NAV and GM. The RSI and MACD suggest this might be a realistic possibility. In one of the previous blogs I calculated that $7.84 represented a 61.8% retracement of the entire move.By sheer coincidence that also happens to be where the lower neckline of a possible H&S formation runs, for whatever that is worth. When in doubt,only use other-peoples-money, not your own.

The H&S target would be around $4.