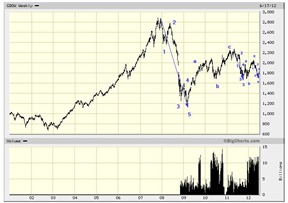 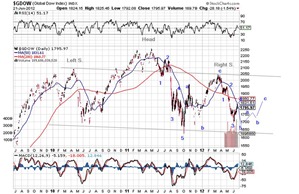 The Global Dow should provide a nice cross section of the World’s equity markets. Abstracting from where the above charts belong in the “Big Picture”, it is fairly clear to see that since the highs of 2007 we have had three successive drops, each retraced by an a-b-c counter-trend rebound. This in and of itself would imply that the trend is still down. Each of the counter-trend rallies were a little more than 62% of the preceding drop, except the last and most recent one. So far it has retraced only about 40%, so it remains possible that the rebound could go a little higher despite yesterdays drop. In fact it is possible that the down leg is not even complete and that we are just in a 4th wave of that down leg (as labelled). We are not sure about any of this, except that the direction is still down.

Once again applying the head and shoulder concept to the charts – this is actually a very well formed specimen – it is hard to escape the conclusion that the next big move should be down regardless of whatever minute gyrations are needed before getting there. Many individual stocks are following the exact same pattern and have a similar ambiguity with regard to the last drop and rebound. RIO, Rio Tinto is just an example; 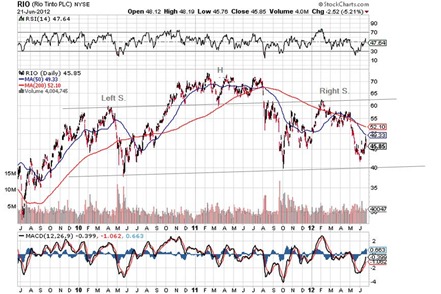