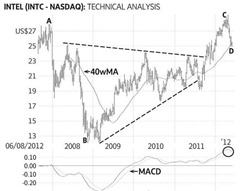 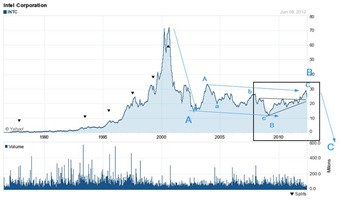 The chart on the left is from the recent edition of the Globe and Mail. It is written by a team of highly respected technical analysts. Essentially they like the stock with a potential of $34 or $39 in the future. The only caveat is that the stock not drop below $24.50 on a sustained basis. The basis for this prediction is the market action over the past 5 years that displays lower highs and higher lows, a “wedge formation” according to the authors.

What caught my attention is the totally arbitrary choice of time (probable dictated by the chart service used). To highlight that, I have shown that same 5 year period in a 25+ year Yahoo chart; it is in the black box. If taken out of context you can come to very different conclusions. As indeed I certainly did as in my last (and only) blog on Intel I concluded that the stock should drop from $27 to $17 and after that, even below $11. Here it is repeated; 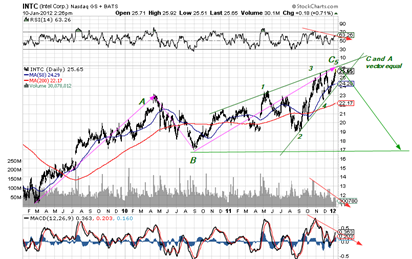 Obviously my criticism of taken time periods arbitrarily is highly unfair as I did so myself, even in a more pronounced way! So here is a new attempt at getting it right. I cannot speak to the “technical” analysis part as this website does not do that, it is strictly EW.

The drop starting with the bursting of the tech bubble in 2000 is wave A down. It is 5-waves! That alone implies that another 5-waves down should be forthcoming, even if a drop from $70+ to $15 is, in itself, a pretty nice bear move. The nine years or so from 2003 to just recently were spent doing the counter-trend A-B-C (much like the NASDAQ itself). The C part of that is what occurred the last 3 years. C waves are always 5-wave moves so my own analysis from earlier this year must be wrong! This can be overcome by assuming that the low occurred a little earlier which adds a first wave, and then adding a triangle for a 4th wave and a wedge to finish the whole structure (in black below); 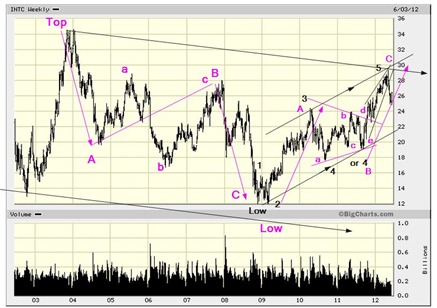 The fact that the recent high failed to reach the level of the corresponding one back in2003/4 can be taken as being rather bearish. Equally bearish is the fact that despite trying for so long the stock was not able to retrace even a minimal 38% of its fall. Stay bearish but keep your eye on $24.50 (see also MSFT next).