tPengrowth is one of the oldest energy trust structures, as well as one of the best. Unfortunately it is difficult to get long-term charts for these companies as they changed their legal structures and most chart services then start all over as if the company had not existed before. There are two previous entries on this stock, the earliest is from Jan. 24, 2011. We recommended a sell after the $14 level for several reasons (see that blog). Had you done so you would have saved 50% more of your money. At the time the a-b-c from the May 2009 low was assumed to be a wave 4. We have reason to change that count but the ultimate target is about the same ( as then < $6). Here is the chart; 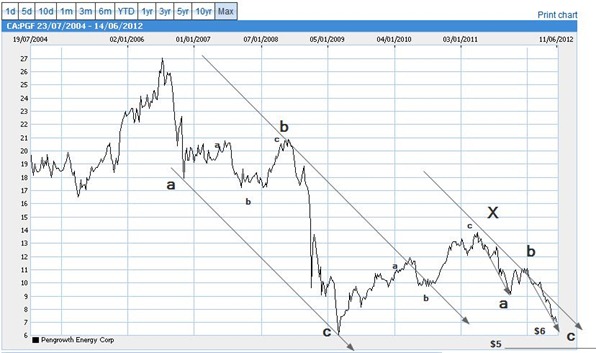 The a-b-c X a-b-c structure now makes the most sense. This is essentially a double zig-zag which occurs when the first bear market was not enough, it is then followed by a second one and sometimes even a third. More detailed charts below; 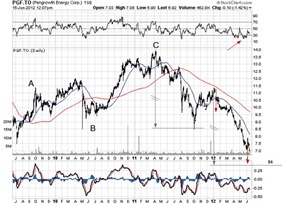 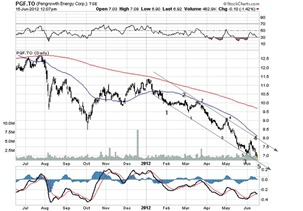 From $26 to $6 would be a 78% drop, certainly enough for a real bear. Equality between c and a occurs at around $6. Wave 5 equal to 1, if indeed it is a 5-wave sequence gets you just a little lower. As all upward moves are a-b-c countertrend moves the trend is still down so at some point we should get a new low (barring a failure). Considering that you are a single dollar away from a possible low selling now does not make sense. Buying should if you are willing to hold but waiting a little might help get a better entry.