“Playing the Potash Field” is the name of a report that Rabobank of the Netherlands, through it’s global Food and Agribusiness Research department, came out with today. In short their conclusion is that between now and 2020 the potash market is going to change, from one that is a near perfect oligopoly to one that will have supply exceed demand by 59 to 100%. Rabobank is usually not taken seriously in the Netherlands. They do not pay taxes the way other banks do and are considered to be a little boorish, they are in fact mostly farmers. So when it comes to matters pertaining to farming perhaps these guys know what they are talking about. Here is the big picture chart; 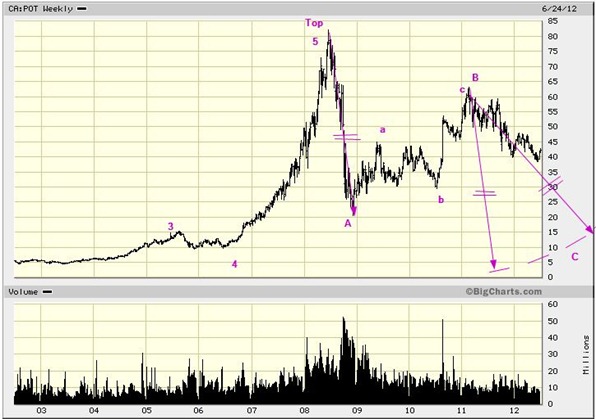 Running an oligopoly ( Canpotex) is doing something that is patently illegal if it were not the government itself that is not just blessing it but very instrumental in creating it. What it takes is a certain level of collusion (much like Encana and Chesapeake are now alleged to be involved in) resulting in price-fixing. This allows the participants to collect the “monopoly rent” by keeping supply well below demand. The polite term for these schemes is therefore a supply management system (eggs , milk , poultry etc.)

Brazil , India and China are going to move into the business or open mines in their own countries. Regardless how it is done the oversupply will materialize according to the report. That would imply that the monopoly rent disappears. How much is that? 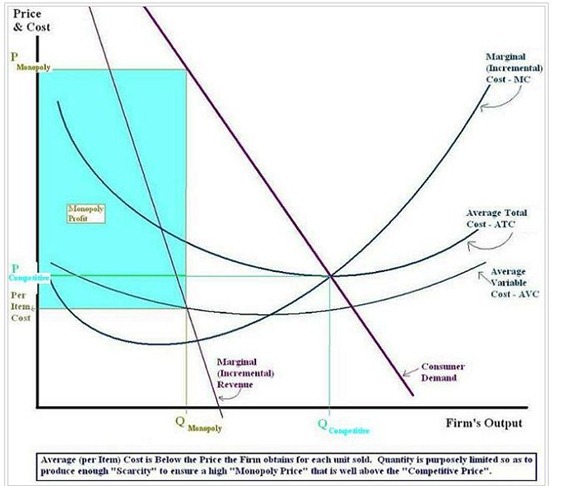 This is from Wikipedia. Price per unit is on the vertical axis and number of units on the horizontal. Less units the higher the price, so the demand curve slopes down. With a monopoly or oligopoly supply is kept low which yields a high price. In an ideal world with full competition  costs will equal the price for the marginal producer. For Potash it would mean that it would lose almost the entire turquoise area.It would only keep the small slice that represents the difference between an efficient and a marginal producer, paying the top dog $700 mln. over ten years does not leave much. We do not know the exact amount as we do not know how elastic the demand is or what the marginal production costs are, but suffice it that the amount is considerable. In this context $15 is not that farfetched. The supply curve in the above monopoly situation is the vertical line through Q. Only one amount at one price is offered. With 59% oversupply the supply curve will shift down and to the right so that the price per unit would drop even further.

P.S. We have seen this movie before with guano, bird droppings of the coast of Peru and Chili. Here is a quote describing the situation;