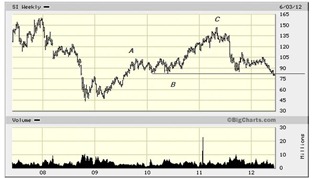 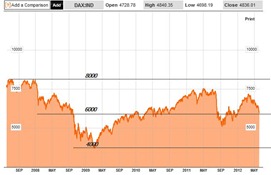 We have steadfastly maintained that Siemens would , at the very least, trade down to $81 on the ADRs. It has. This level corresponds with the lows of the B in the larger B wave (actually more like $79). We do not expect it to stop here – after all the large B wave suggests a new low sometime in the future – but the count is presently not entirely clear and actually differs slightly from the DAX itself. Both charts are roughly equal, on both we are, very roughly , in the middle of the last 5-year range, but whereas the DAX sports a rather distinct wave 2 from last year’s Oct. lows, Siemens does not. Both are still pointing down.