See previous blog under SLF MFC. Sun life did as expected, even a little better by going right to the highest target of $25. Manulife did not fare quite as well. Here are the charts. 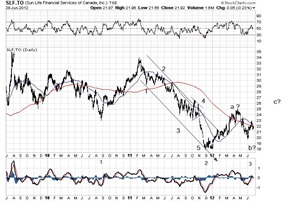 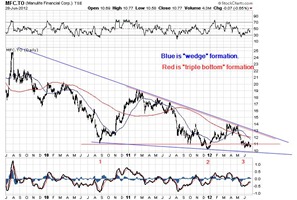 The correction in Sun life from $18 to $25 could be the entire correction, it may also just be the a part. We cannot tell at this point so will leave that one alone. Manu is, of course our favourite “canary in the coalmine” stock, already pronounced dead for all intents and purposes. However, that could have been a little premature as there are now two scenarios that would call for a serious bull move. One is the wedge concept (see previous blogs on MFC) that could be completed soon with a drop of just a single dollar. The target for that,over time, could be as high as $29, the peak after the Great Recession. The other possibility is that we have a triple bottom formation. This is not an area that I am familiar with , but the theory is that the triple bottom would be “confirmed” with a move above the (slanted) top-line, say $13/$14. Without this confirmation there is obviously no triple bottom because when the third bottom does not hold there cannot be a triple bottom! Notice that Sun Life (or GWO) do not have this triple bottom pattern at all making the whole thing rather dubious.

Institutional traders, as opposed to retail, usually do not have a clue where a stock goes, nor do they care very much, as the lack of clarity is not an obstacle at all. Just buy it and make up for your ignorance with discipline. Use a stop at , say, $9.50, do this sort of thing often and you will be way ahead of those that know precisely what tomorrow brings.