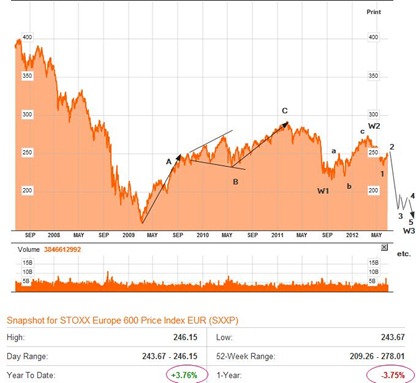 The Stoxx 600 index provides an excellent broad cross section of the European stock indices. The EW count , as shown, suggest that the next move would be a 3d wave down. Equally interesting are the performance numbers at the bottom of this Bloomberg chart. Year to date, that is the last 6 months, we are up 3.76%, but measured over the past year we are down 3.75 %. Over the past 5 years we are still down by about 50%. This is after an endless stream of interventions by central banks, the IMF, and other “regulators”, both in Europe, the US and elsewhere, covering the entire gambit of conceivable tools from direct equity participation to moral suasion and everything in between. On top of that there are, no doubt, dirty tricks being pulled off under cover of darkness and behind the scenes. Things that the English would judge being as not done or not cricket. The US plunge-protection-team comes to mind , never mind other nefarious operations that we have not even heard of.

Someday, and it shouldn’t be that long from now, the World is going to wake up to the inescapable conclusion that all these government actions are little more than a display of ineptitude and impotence, all just an outlived economic fantasy. The so-called Greenspan/Bernanke put will disintegrate as we reach the point of recognition, usually the mid-point of wave 3, next on the menu.