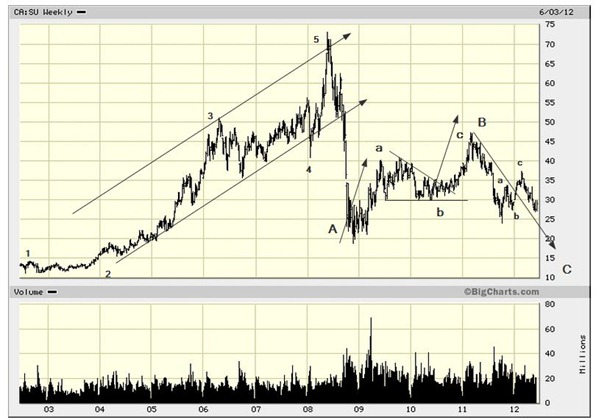 The last few weeks saw oil dropping rapidly. Looking, once again, at Suncor oil should go quite a bit lower, this despite the longer term outlook that we are running out of this stuff. Commodities are priced at the margin and consequently the long-term outlook has very little to do with what oil might do over the next few months or even years. Using Suncor we can reverse-engineer where oil should go. The chart is perfectly clear. First the big A leg down followed by the retracement which happens to be near an ideal 62%, clearly 3-waves. Then the stock does it again only at a smaller degree. This is wave 1 of C. It too is followed by a 3-wave retracement of about 62%. Now THE major rule of EW is that 5-wave moves are in the  prevailing direction of the trend, and 3-wave moves in the opposite direction (counter-trend) Ergo the trend is down (even if the actual count is incorrect!) Both a-b-c’s are as plain as daylight. How exactly C will develop is a different matter altogether, but down to $17 or so is a good initial guess as that is where C equals about 62% of A.