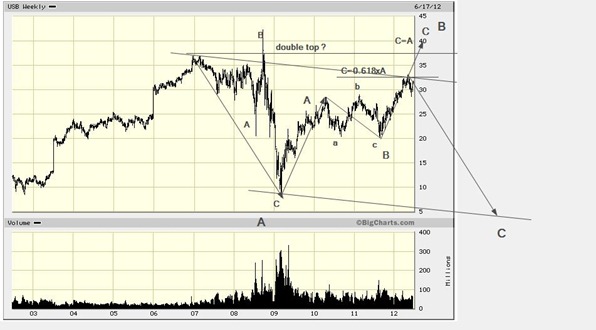 US Bancorp is developing a “flat”. A structure that follows the 3 –3 –5  formula and is, essentially, a sideways move. We may, or may not, have completed the middle leg B which itself, is an a-b-c. Often the c leg is equal to the the a leg. Equally often it stops at about 62% of a. It looks like that may be the case here (even if a further rise to , say, $38/40 cannot be excluded completely). The C leg may have started a few weeks ago or it may start after one more brief high that would be achieved by adding just a single dollar.

In our opinion it is nothing short of amazing that this stock is trading within $5 of its all time high in 2007 (and 1998). A buyer at these level is either brain damaged or suffering from Pavlovian conditioning to Fed easing. Despite interest rates already at rock bottom, they find consolation in the thought that another “twist” or QE3 will somehow extend this crazy process into the heavens. Below we have it one more time and we would be out, period.

.PS. 1998 was the year the Fed eased to accommodate the market after the demise of Long Term Capital Management –when genius failed, according to the book’s title- at a cost of a mere $4.6 bln. Their bet was that lesser credit bonds would converge with the better credits, which , in the end they did were it not with a little delay as a result of the Russian disintegration. Ironically it is precisely that convergence ( i.e. when Greek bonds trade at the same level as German bonds) that is now causing a lot of problems.

For purist E-Wavers I should point out that the above count is NOT the accepted one in Gainsville. They prefer the top in 1998 and in 2007 wave 1 of C started and now wave 2 is complete. For those that prefer to play fast and loose with the rules, one could also claim that the flat started in 1998 and ended in 2009 and was, in fact a 4th wave. That would imply that the rise from the March 2009 lows was/is a fifth wave. The target to the downside is , at least initially, about the same.