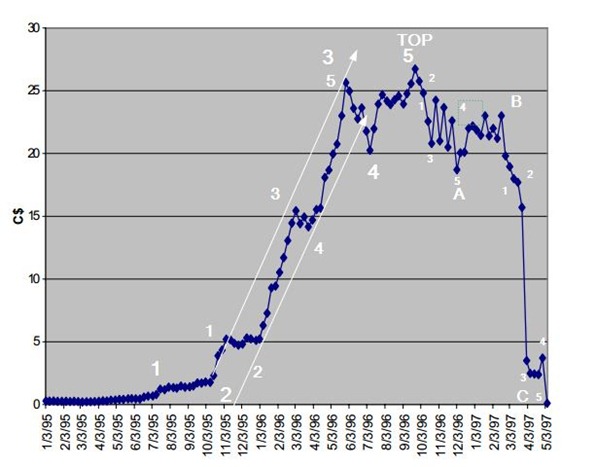 It is difficult to get a chart after a stock has died. Here is the best I could find. It is textbook EW. 5 up and 3 down only in this case that was all there was. This stock traded on the TSE, not the Venture exchange so it was “safe”, almost a blue chip. Like a good novel the stage was set in a far away country, one where head-hunters were still held in high esteem, Borneo. The characters were also interesting, an ex money-market trader with a taste for booze, not uncommon by the way, a Dutchman who never lost his head and a side-kick womanizing fellow from the Philipines. SNC Lavalin  and American Barrick played minor but crucial roles. The best part, in my opinion, is this guy that is dropped out of a helicopter over the jungle without a parachute. He is found the next day! You would be lucky if you found a white 747 there within a month. We believe what we want to believe.

A report came out the other day that perhaps the number of psychopaths in the financial industry is as high as 10%, they don’t care. Earlier we saw that a majority of MBA students at Harvard thought nothing of cheating if it served their cause. The world is losing its moral compass and the temptation rises faster than the price of gold. So if you are caught in another stock scam, make sure you are at the winning end.