Invariable we all draw our conclusions from some, mostly intuitive insight and then spend a lot of time to make the facts fit the conclusion. EW will not work well under such circumstances, which is perhaps why marines are noted for their ability to apply EW rules and guidelines objectively. It would seem that the dumber you are, the better an analyst you become, which may explain the many failures I have had using this methodology.

What undermines one’s objectivity the most is probable herding, or rather the effects of that. I read quite a few different publications from practicing E-wavers and try as much as I can to ignore them. However, knowing that many of these have far greater experience and or prestige than I ever will this is hard to do completely.

The last few months all kinds of excuses have been presented to explain what is taking so long. Some invent new non-existent patterns such as the jaws of death while others prefer to cloak their predictions  a la Nostradamus, in such ambiguous terms that anything they say is essentially not testable.

The common wisdom , stemming from Prechter himself, was that the top occurred in 2000 and since then we are on our way down. There are good arguments to support that but then at one point it looked like 1987 was the top too! 13+ years is a lifetime in investing. Here is the SPX: 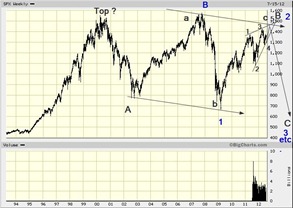 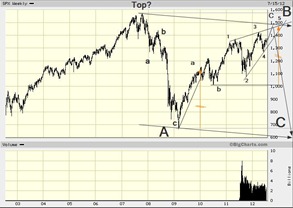 The way it is supposed to go is that you get a correction that in essence follows the ubiquitous A-B-C pattern in which A can be a 3 or 5, B is always a 3, and C is always a 5. Applying that makes the top in 2007 the top of B and we are now in C. Wave 1 is complete and we are waiting and waiting for wave 2 to peak so that this thing can fulfill it’s destiny (in blue). Wave 1 being all of C was rejected out of hand on grounds unrelated to structure but having to do with other metrics, volume, optimism etc. etc.. Fine but still one might be excused for thinking that the May 2009 lows were in fact the end of the correction, after all the financial world supposedly had come close to the edge of the abyss. By the way, in this particular count the rise from 2002 to 2007, a B-wave, should be a 3 wave affaire. I have no problem counting it as a 5 wave affaire. The ultimate  test in EW in my opinion is the “good looks”one and this count simple does not look good,the wave 2 looks completely ridiculous. There is , however, a way to resolve this issue and keep the church in the middle. Suppose Prechter is right about the top being in 2000, and we then combine the last three waves to form a single B-wave, then we can go just a little bit higher and then still get this catastrophic drop the bears are expecting. Here is the DOW; 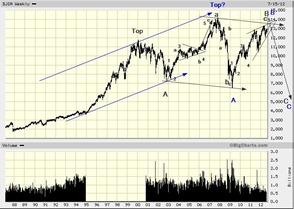 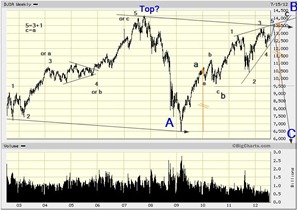 As you can see from the chart on the left, combining the 3 waves after the lows of 2002 as one single B-wave makes sense at least in so far these three seem to form an integral part of a 10/11 year long parallelogram. The B-wave is “irregular” in that new highs were made! It also becomes quite clear that if you do not combine these 3 waves as one, the choice of the 2000 high as the top becomes rather doubtful. The next top, which is higher by a lot would make more sense and the wave going into it can most certainly be counted as a 5, even the trend-lines support this.

To conclude it would seem to me that one way or another it is unlikely that the DOW will get much above 13500 in any scenario. This last wave up can be a 5 or a 3, I do not really care at this point as the next big move is down, down a lot!

PS The DOW is one of the least reliable indices. Only GE remains, the rest of the thirty are continuously dumped. If you take out this survivor bias the index would probable not be above 5000. Also the “fundamentals” have become more or less useless. Under the discounted cash flow approach every asset that earns anything at all has a theoretical infinite value with interest rates at zero. Those that argue that the P/Es could easily move from the present 15 or so to 35 are absolutely correct, in theory. Those that argue that the entire financial system might well collapse all together at the next visit to the abyss have a lot of empirical evidence on their side. It has almost become a a binary scenario and each time the ferry passes the island with the natural sunbathers, the boat lists dangerously to one side. All it takes is one more passenger and the whole thing will capsize.