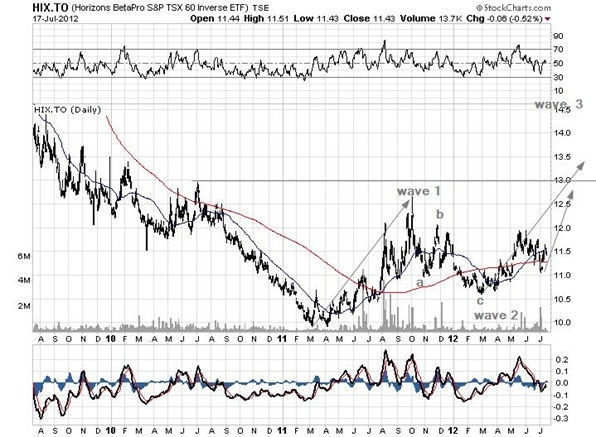 The HXD is my preference but some people do not like the notion of going leveraged 2x.  The idea of leverage seems to hit intelligence levels at very low IQs. RBCDS outlawed them some time ago and I understand CIBC WG is doing the same now. Here is  a simple one, non-leveraged, for an alternative.

All of this is a little like gun control. There are a few places where there is virtually none. Switzerland is a good example. Most of the armed forces there are “reservists”, they get to take high powered guns home, yes home. Turkey has the 3d largest standing army, armed to the teeth, but also the highest level of gun ownership among the population. Nothing ever happens either in Switzerland or Turkey. Why is that? Simple because there is no substitute for freedom, freedom of choice, and experience. Both DS and WG want to save you from yourself, or, perhaps, they do not trust their own brokers!. But then again, it may not be their fault, the regulatory authorities should have gotten ahead of this one a long time ago and they did not.