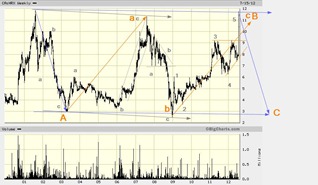 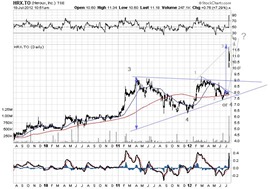 The other day they sold their aerostructures and industrial division for about $300 mln. This propelled the stock up, briefly , by 33% The other part of their business is making landing gear for aircraft. The chart is hard to interpret properly, perhaps above my pay grade , which is not hard considering I am not paid at all. Looking at the big chart, one might wonder why the low of 2009 is not it. After all a nice A-B-C could be considered done at that point. The problem with that is that the C leg has to be a 5-wave move. It isn’t. The first leg, into the 2003 low is unequivocally  3 waves. The second leg up into the 2007 high is clearly also a 3 wave affaire. So is the third leg down into the 2009 low. Three in a row does not make a flat, therefore we believe the correct count is A – a-b-c – C. The leg we are in presently, or may have completed, must then be sub-dividable in 5 separate waves which is not that hard to come by. Once complete – a 4-5 may still be required – the stock should then fall back to the levels of the previous two lows (2003 and 2009). We would sell.