This is the chart from just a little over a year ago, June 17th 2011 to be exact. Click on it to enlarge. Red is the original colour used for the whole count and the anticipated future. The lines are not intended to be precise as you go out further, just a ballpark best guess sort of thing. Purple is what has actually happened. The stock does retrace the entire wedge, does not stop at $72 but goes on to $69 and drops faster than expected. It then rebounds as expected but does about $10 more than shown, but it does do it more or less in the amount of time allocated.. Volume rises sharply to about 40 as the stock trades down and diminishes as the stock climbs back up. The “wild” ride anticipated has become even wilder due to our friends at the Fed. Wave 3 should start any moment, and if the past is any guide, should do at least as much as indicated (about $50).

Your broker will of course argue that this is all just nonsense, MMM after all is a blue chip if ever there was one and yes the p/e at 21 is a tad higher than the average but nothing to get concerned about. This is the buy and hold type of thing that you keep for the 2.3% dividend. Anyone who has ever been immersed in the psyche of the life insurance biz will be familiar with the story of how the poor and destitute emerged victorious after cashing in their whole life policies and rebuilding their empires with the proceeds. The reason, which is of course conveniently never mentioned, is that you sell your worst investments last, you do not hold on because you want to but because you have to. For most people MMM will be one of their best investments and therefore it will sell quicker and easier than that penny gold stock that has been no bid for a while.

Common sense, a very scarce commodity, would dictate a sell here as well. Anther $5 and we will have a triple top. If fear of heights does not set in immediately it is worthwhile to consider that there is a proven potential for a $50 drop, a risk/reward ratio of about 10 to1. Also those attracted to the H&S approach, may detect an inverse H&S pattern that is decidedly bearish even if this act of levitation could still go on for another year. There is also a “normal” H&S pattern that has no time left on the clock; 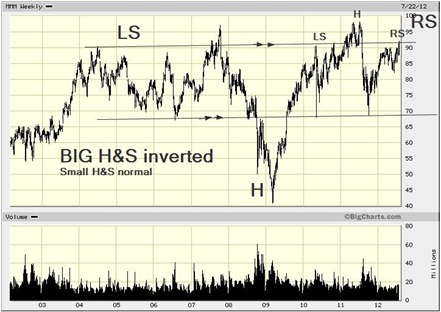