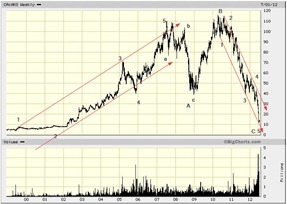 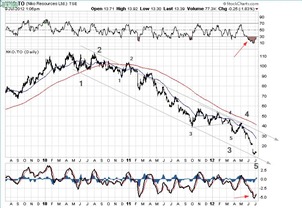 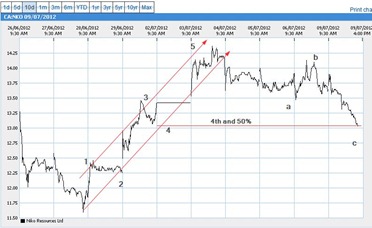 Last time we looked, about a week ago, it was virtually impossible to tell if this stock had in fact completed the C-leg down in 5 waves. Today we cannot be sure today either but there is some constructive new information. First the RSI and the MACD are both at three year extremes. The count is five waves and hits the lower trend-line if you use the April rather than the August 2010 high; April is the actual high. Lastly, the short-term chart – I can only get 10 days! -  could be counted as an initial 5 wave move followed by an a-b-c down. This does not exclude a normal corrective rebound but it could also mean that a new bull was born. A logical first target would be about $42 . A stop at around $12.25 should be used just in case we have not seen the lows yet.