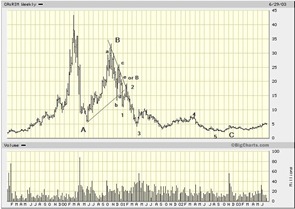 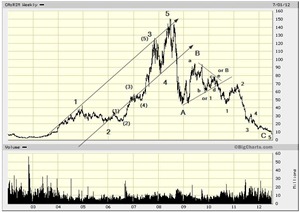 Last time  we got out of RIM at $17 and suggested that it might be a buy again under $10. Here we are , well under that so is it a buy? Well above are two different charts of RIM, you can enlarge them and move them around to better compare them. These are what are known as fractals. Not necessarily perfectly identical but very similar structures at different sizes. EW is essentially predicated on the evidence based  recurrence of self-similar structures, the most basic of which is the 5 up 3 down cycle. This concept can be helpful at times to verify the validity of a EW count.

On the left chart the stock rises from next to nothing to about $43, then crashes, rebounds and crashes again in a clear a-b-c, ending at about $2.30, a loss of 94.7% On the right the stock does something very similar, peaking at $150 or so. If it does the same proportionate drop the stock should bottom around $7.95, give or take (this is not like cutting a camshaft at tight tolerances on a lathe). Today we are at $7.40; 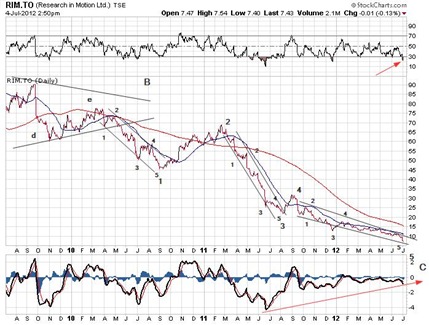 The new CEO is , no doubt, viewed as a lightweight in North American circles. He is soft spoken, very knowledgeable  and when he says “Nothing is wrong” he means it. Here we prefer backslapping, gregarious loudmouths that bluff their way out of every situation. If one can bridge this great cultural divide, it is easier to become a little more constructive. There is 2.2 bln in cash, 75 mln subscribers, a lot of proprietary know-how and patents and their own network. The new product may be late in coming but perhaps it will be fantastic. Who knows, but we would lean toward buying this stock. Even Nortel went from $3 to $12 before it died and just think, if one had bought this stock between these fractals, you would have made 65x your money.

This chart shows how the two fractals fit together; 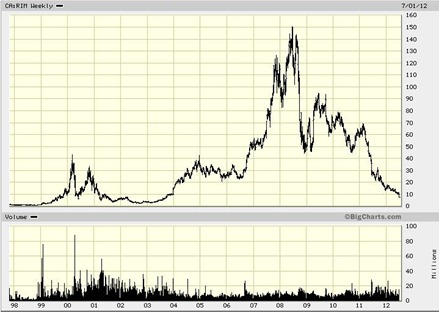