Clearly the railway companies have , in the main, enjoyed pretty good times since the second great recession. Shipping companies have not. There are a few obvious reasons that may explain why two different sectors of transportation have such different experiences. One is that railway companies usually own the track, a very costly proposition in terms of investment in land, and an obvious cause of reduced mobility. Railways are to some extent always regional monopolies. Secondly the investment in rolling stock is, relatively small compared to the whole.

Ships operate on the open sees and can change their route mid-stream if they care to do so. Relative to the infrastructure, mostly owned by governments and not the shipping companies themselves , the cost of the “rolling stock”, that is the ships, is enormous. Consequently shipping companies are far more sensitive to prevailing interest rates and the hog cycle. This cycle occurs in most businesses that have alternating over- and underinvestment as the result of too rosy or too gloomy outlooks, more so now with low rates to stoke the fires. Mitsui & Co. is a good example, the largest and from Japan. 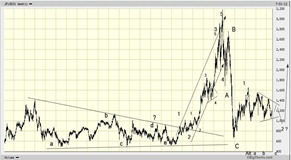 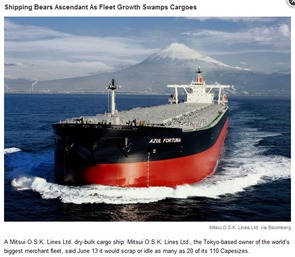 After a 14 year triangle we get a moon shot followed by a shot in the head. Schumpeter’s creative destruction is at work here. These boats do not come cheap and getting rid of them kills your P&L. And the freight rates, expresses very eloquently by the Baltic Dry Index, which has nothing whatsoever to do with the Baltic. 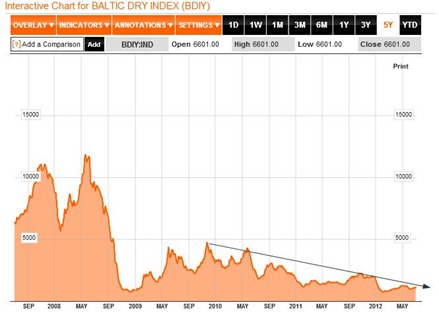 It is now,as expected (see previous blog) at a new low and almost at the lows of late 2008. Frontline FRO and TNP are two other shipping companies. FRO (see prev blog ) is working itself down to equality between  A and C in a large A-B-C correction. It is getting close. TNP, Tsakos Energy Navigation Ltd is one of the bigger operators, Greek as so many are, registered in Bermuda. It seems to need one more leg down but yields 11%.

The trade to do might well be short the rails and long one of these ships.