In two previous blogs (Jan 5 and July 7, 2012) we discussed the likelihood of this stock going either to $72 or $69, depending on how big a triangle , 12 year or 4year, you assumed occurred. Time wise, from the June date we mentioned the possibility of this whole process taking another 2 months which makes it about Sept 7, roughly now. Here is the chart again, showing only the smaller triangle; 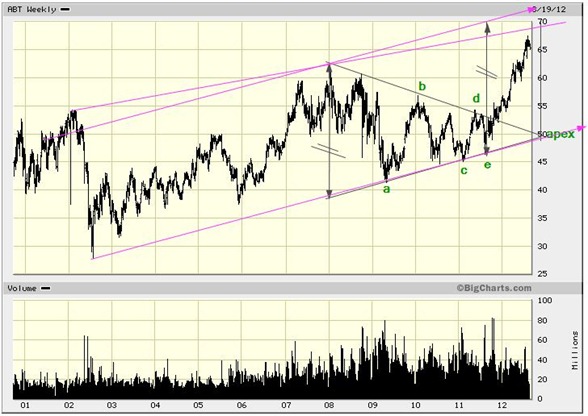 The highest reading , so far at least, was at $67.45 just $1.55 away from the target set 8 months ago when ABT was trading at about $10 less. Still we are not perpendicularly above the apex and nor have we used the total width of the channel (purple lines) so $69 or even $72 are still possible. The problem is that these charts do not necessarily show the highs and lows of the day, they are pretty rough. To fine tune this a little here are two more; 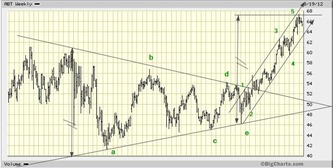 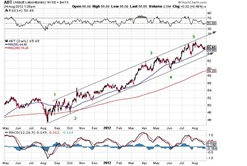 In the short-term Big chart above the triangle’s mouth is precisely the distance travelled in the thrust, which would argue that the top is in. However it could well be that the mouth should be measured some 8 months earlier which would add about $3 . This would bring the thrust high to around $70.  It is furthermore possible to count the thrust as having completed 5 waves already. Given that this is little more than a best guess another high should not be excluded. It is fine to split hairs but if you own this stock you should dispose of it now. If you do not own it , it might be a good short, now or a dollar or two higher, next stop is at $41