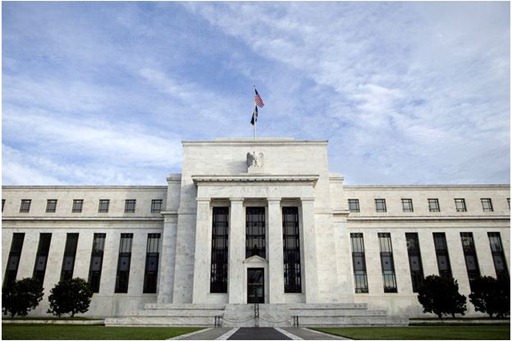 This is the HQ for the Federal Reserve System. The (Eccles) building speaks for itself, it is pretty austere and not particularly welcoming. There is absolutely no imagination here.  The Chair receives $199.700 per year, all other members about $20,000 less. The Fed is a private corporation, owned by a limited number of shareholders (like JP Morgan), who receive a statutory dividend of 6% of invested capital.

From the most recent meeting;

The dual mandate consists of maximum employment and stable prices. As you can see from the above “growth” is viewed as being synonymous with employment at least from a policy action point of view. We know that the stock market is also directly targeted.  The Fed is therefore basically responsible for prosperity and the continuation of the American dream. Essentially an impossible task, full of contradictions, which makes it all the more amazing that the general public actually believes that they will succeed while at the same time expressing their unwavering believe in the free-market capitalism. To add to this, there is no body of economic science that has been tried and found sufficiently true enough to be reliable to use as a guide. Decisions are accordingly made for the most part using the wet-finger method. Fed speak, if the truth be known, is not so much a deliberate attempt to obfuscate as it is simple the result of genuine groping in the dark. Read the entire minutes!

So QE3 is on it’s way, and just to help, China’s Central Bank also “injected” more liquidity. Will it work? Presumable “work” in this context would imply lower rates in the near future. Here is the US Gov. 10-year chart; 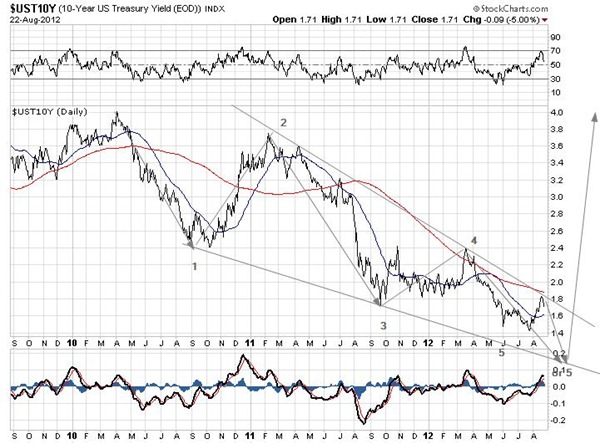 For longer term reference we have added the St. Louis Fed’s 10 year constant maturity chart. The high was slightly above 15% and the low at 1.39%. Both , by the way , violate another mandate that the Fed. has, which is to keep interest rates at moderate levels, which can hardly be said for either Volcker or Greenspan/Bernanke rates. If you look at the 10 year chart you will see that interest rates actually rose by almost half a percent since July, which does not surprise us considering our expectation of a low back in June (June 7 under “interest rates”). BUT, because the chart has the unmistakeable signature of a diagonal,  we have to keep an open mind at least to the possibility of another, brief, low extreme. Wave 2 and 4 touch at 2.4% and for the past 10+ months interest rates haven’t done anything. A drop to the trend-line is still a possibility. Rates could reach about 1.1%. It is not something you want to trade on. After a new low, should it even occur, a fairly violent rise to 4% for starters should be expected thereafter.