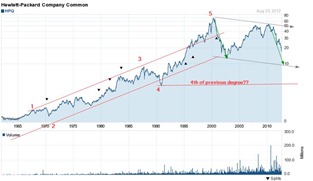 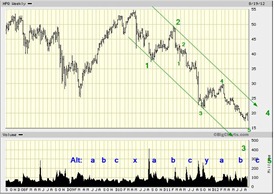 We have tried this one before, only to get stopped out the same day. Things are not looking any better today. The counts in these charts are debatable but we assume, like all other tech. stocks HP had it’s top in 2000. From that point on one would expect an a-b-c correction that normally takes the stock down to the 4th wave of previous degree or 50/62 %. That had already been done in 2003. Given the 5-waves up from there we toyed with the idea that the stock might be in a whole new bull market, which it wasn’t.   Now it looks like the stock has had 5 waves down from the post great recession high of $55. However this is highly unlikely as waves 2 and 4 would be identical in structure; not impossible but unlikely. Therefore we give preference to the idea that we are only just about to complete wave 3 and still have 4 and 5 to go. Whatever the count we would wait for a reading closer to $10 before looking at the long side.

Sony, that other tech. wunder child, might be a better bet at $10+. It could have completed the sequence and it comes from a much higher level. The drop is more than 92%. 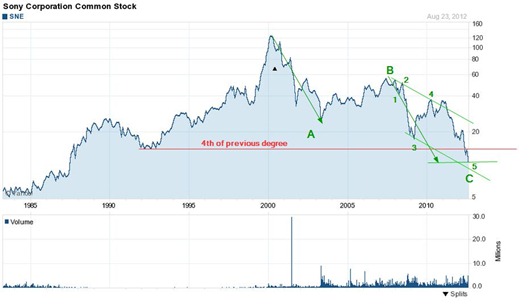