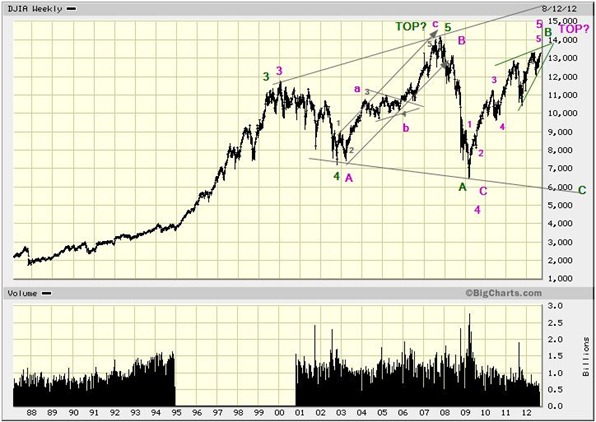 A few more thoughts concerning the DOW. The top in 1999 would have seem quite appropriate considering the run up during the 10 or so years preceding it. However if you take the DOW Transports, the top is better placed in 2007. That leg up from 7000 to 14000 can, in my opinion, be counted just as easily as 3 waves or 5 waves. The dive back down in 08,09 is best counted as  3 waves but again it could also be viewed as 5. Consequently the entire structure from 1999 to the start of 2009 could be viewed as a completed correction, an irregular a-b-c. In fact this possibility was rejected by the Prechter people not on grounds related to the structure per se, but on other metrics such as sentiment etc. If that were the case the next leg up could be a wave 5 and should unfold in 5 separate waves. Again the leg up from the 2009 lows can be counted either way, as a 3 or a 5.  At 13000 it is already well above the peak of what would then have to be wave 3 at about 12000. The higher top in 2009 is irregular, so it does not count (I think).

Some would argue that the whole structure over the past 13 or so years is one single pattern,  see for instance Robert D. McHugh, who has dubbed this pattern the “jaws of death”. There is a guest part on his website that is freely available under;  https://www.technicalindicatorindex.com/subscribers/guest-articles/McHugh%27s%20Article%20Jaws%20of%20Death%20February%2017th%2C%202012.pdf

This particular pattern does not, to my knowledge, exist in the standard EW repertoire  even though similar results may be obtained by combining two separate pattern, as I have done with a wave 4, irregular a-b-c and a 5th wave. In more detail it looks like this; 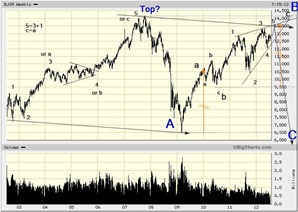 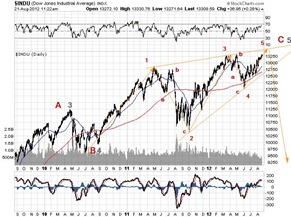 On the left we still show the rise from the 2009 low as a B-wave. Which fits rather nicely given that the C and A legs are just about vector equal AND we are about to hit the trend line. The pattern over the past two years or so is a rising wedge that is pretty well text-book, including alternation. This wedge could be either a C or a 5th wave. The target is around 13600, which, at the present pace of roughly 400 points a month could be reached any time now but certainly no later than the end of September. In the mean time the NYSE is behaving according to script. This could, of course change; 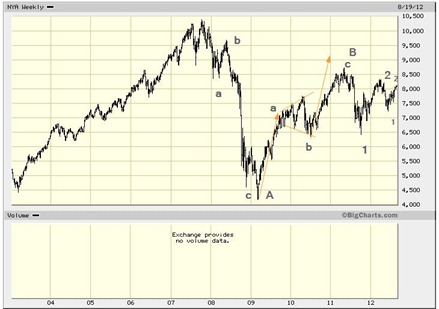