Back on the 21 of Dec 2011 we expressed the opinion that one should stand aside. or perhaps even get short this stock at roughly $45, see the red arrow; 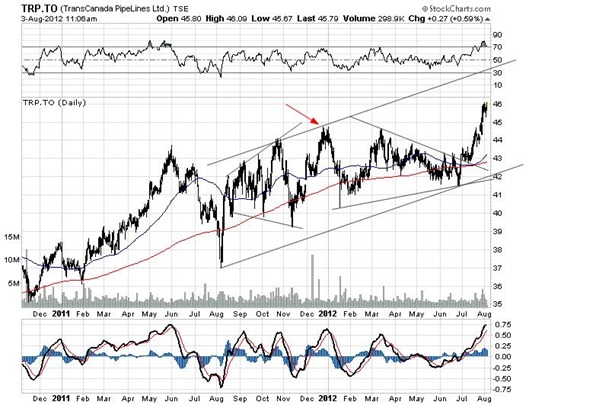 We were wrong. Now 8 months later the stock is higher by a single dollar having been below that $45 level for most or even all of that time. It is not at all clear what the pattern is but I suspect that somehow a triangle is hidden in this chart. In any event the upside is very limited as becomes clear looking at the following charts; 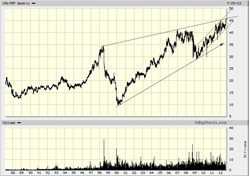 As can be seen from the Bigchart the stock is right on the upper boundary. Looking at it from the 1980-ties, the stock is now trading above a channel that has defined it for most of that time. In 1980 20 year bonds were close to 20% in Canada at which rate your money more than doubles every 4 years (rule of 72). There are 6 such periods into 2000 so by that time you should have had 64X your money (abstracting from taxes , dividends and other minor considerations),and there are still 4 such periods left. Calculating value differently, by simple comparing prevailing rates, then 20% , now 4% the stock should be roughly 5x more valuable all other things being equal. It is not,just 4.5x.  Still a sell in our opinion.