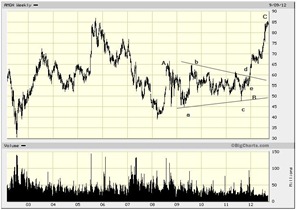 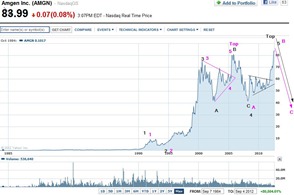 Back in December of 2010 we expected this stock to rise by about $40 (see previous blogs). It almost did exactly that but is now threatening to double top. We would always sell at that level as a matter of course and certainly after such an incredible move on nothing in particular. Various counts could be applied to this stock but almost all would suggest that it is a sell rather than a buy. Time to not own this stock and maybe even short it if it should move up just a little bit further. We previously suggested getting out at about $ 75, good for a 50% gain.