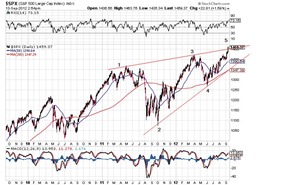 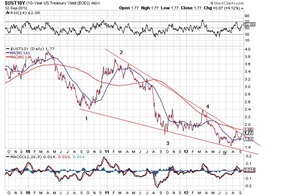 So we got the Fed and they are easing and easing and easing. The S&P charged through our ideal target of 1450, all the way to 1463. That is fine as it does not negate the pattern, it is simple a throw-over which is as common as daylight. If this interpretation is correct it should stop here and start falling in the next few days.

As there is never an upside limit on where stocks can go, I have added the US treasury 10 year bond yield. There is a limit to how low it can go, zero being the level where the Fed is practically impotent. At 1.4% at the low it could be argued that the Fed is, for all intents and purposes, already impotent. Notice that there is a very high degree of correlation apart from one being the inverse of the other. Todays action on the TLT etf. shows that interest rate were actually moving up in contradiction to the stated objective in the Feds action today.

The Fed’s intentions are to keep rates so low in order to raise asset prices which then, through the wealth effect, would stimulate main street to spend a little more and boost demand. A few simplified lessons in economics makes it clear how stupid this approach really is. Basically every economy has three players, the Government, corporations and households. We all know that since time immemorial governments spend more than they take in and are therefore chronically borrowers, not savers. Corporations, on balance and as a group, borrow about 1/2 of their capital needs. There are sound reasons for that but suffice it here to note that they too are structurally borrowers. That leaves households as the savers either as the result of a conscious decision, or as an “involuntary” act as in making government or corporate pension contributions. Keeping interest rates low simple transfers income from savers to borrowers, that is from households to governments and corporations. How this miraculously stimulates spending, 70% of which is done by households, is the riddle that the Fed has not explained. It is true that the young households are stimulated into buying a bigger and better home, so there is no doubt an inter-generational transfer, but as a whole, households lose out big time with these policies.

I watched Bernanke’s entire speech today and can’t help but sense that he is tremendously unsure of himself. He is very wishy-washy, tentative and seems to be hiding behind an aura of academia constantly pointing out the limitations of Fed policy, using the word panacea at least 20 times. Also he is not pushing back against the lack of government as it applies to the fiscal cliff and other little problems that he acknowledges completely overwhelm the Fed. I am not impressed.

P.S. The critical difference between governments, corporations and households is that only the last one actually dies and consequently goes through an unavoidable life cycle, creating an obvious need for savings. Governments believe in eternity and corporations hope for it.