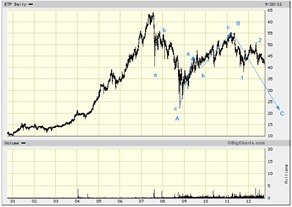 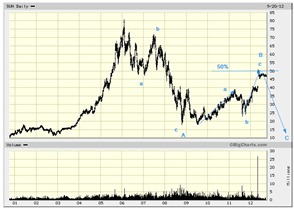 The two companies are not the same size. Sunoco at about  4.9 bln. capitalization is about 1/2 the size of ETP at 10.33 bln. Both stocks have traced out similar but not identical charts. Still the range is quite comparable, roughly between $70 and $20 and both sport the same pattern, a first major leg down followed by a (B-wave) a leg up. In EW terms this is bearish as typically two major legs down are required to complete a bear market. Since both stocks are presently sitting pretty well in the middle of the range, both should be sold.

All mergers can be compared to the situation in which the pig and the hen decide to start a joint venture selling ham & eggs for breakfast. One of them invariable dies, not necessarily the smallest one either. (think DS and RBC, DS being the winner by any measure). Still in most cases the junior partner has to yield, and size matters.

The interesting thing about this couple is that one is incorporated and the other is not.  It is a Limited Partnership. How the two are to be merged is a bit of a miracle that will take a little bit of legal tinkering. The two companies appear to be active in complementary fields of the energy space. This can be a plus as it broadens the base, it also means that synergies are harder to obtain and that managerial skills are spread to thin.

We would sell rather than figure out the minute details.