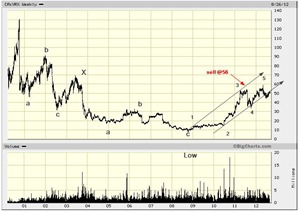 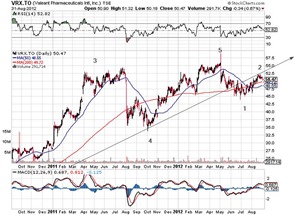 On July the 26, 2011 we opined that, given a little wedge that had formed, the stock should not trade much above $56/$57. It only got to about $55 and dropped immediately by about 30+% (now classified as wave 4, maybe). Then, unexpectedly to us, it goes right back up but again does not trade much above that target range and then only for a very brief moment. Presently it looks like a first wave down from the top ( May 2012) was formed followed by a wave 2 which is hitting its head against the lower channel boundary. Wave 3 should be next. The target should be around $20 or so when all is said and done.

P.S. When you predict, do it often. So the stock shot up on the 2.6 bln purchase just made, the 15th so far over the past year or so. One thing one should keep is mind is that this company excels in not paying for these acquisitions, that is much of the cost is booked to “goodwill” which is one of these accounting fantasies that allow you, over time. sometimes a long time, to gradually take these costs through your P&L by amortizing the goodwill. VRX has a total of about $14 bln is assets, about $11 bln of that is goodwill. I do not remember ever seeing such a lopsided ratio anywhere other than in Alice in Wonderland.