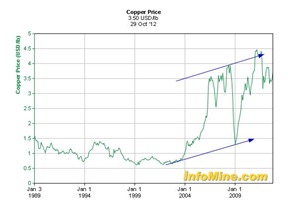 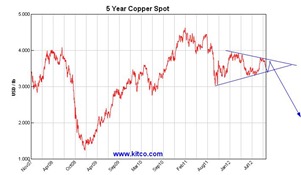 Somewhere in 2002 copper probable started a new bull leg, pretty much the way gold did from 2001. The exact wave count from there is not perfectly clear but the best fit would be 5 up into the highs of 2008 followed by an A for the great recession drop and then a B (to moderately higher highs) in the rebound. This is , of course, an industrial commodity used just about every where. Demand from China is reportedly a significant factor, particularly when it is stockpiled over and above the immediate needs. Should this demand weaken further the price, which like all commodities , is determined in the margin, could drop quite a bit further. Note that even with the recent drop we are still something like 3x the price for the first 15 years of the chart. In detail things look like this; 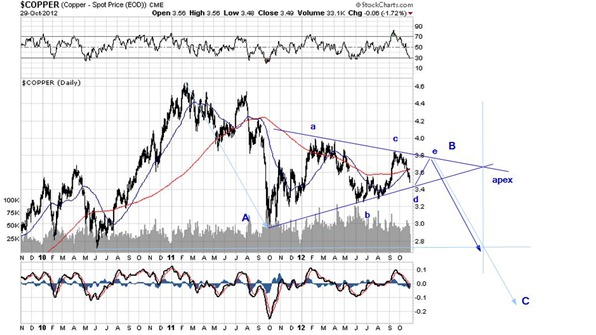 For the past year the price has triangulated as the world is debating the hard or soft landing question for China. We have no answer to that but simple observe that the pattern, so far at least, is that of a triangle. As stated so many times before these occur only in wave 4 or B positions. Given the apparent overlap with wave 2 (which might not be the case) we would prefer the wave B alternative but for the immediate future it does not matter. If the triangle continues it should form an e wave next and then drop to , at least 2.75 which, by the way, is the level of the b in the B, a normal point. Should all this transpire you do not want to stay in copper stocks but for the moment there is no rush. FCX, Freeport,BHP and many others have very similar charts.  Below is a chart that could support a 5 wave count;