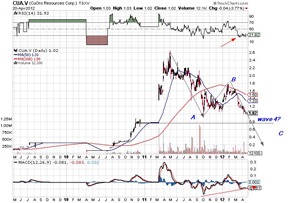 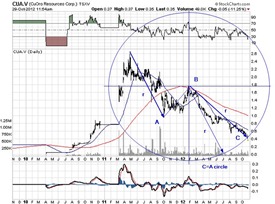 The president of this company resigned three days ago. In our first blog we mentioned that the company was entering the “dig or die” phase simple because all the options held by management started to drop below the water line. In Germany, where this stock also trades, some websites are expressing alarm and disgust ;

Which freely translated would say, Mine rocket? Or what the h…. is going on. Interestingly the company’s own website has all the news up to date and offers this in English and German. Unfortunately the translator has been on vacation since June. Apparently, when it comes to investing, some are more equal than others.

At 35 cents this may well be a buy, C=A as a vector and the RSI and MACD are respectively at an extreme or not confirming.  But then there is this phrase that says that fish rot from the head down. We will pass.