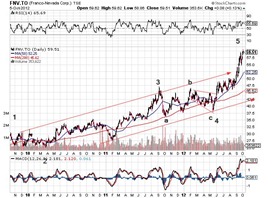 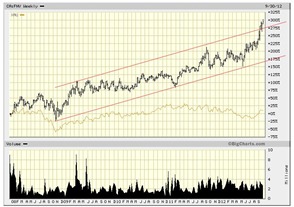 Franco Nevada is a gold royalty and stream company. It is essentially a holding company that does not itself have operations that can go wrong, or costs than can go up etc.etc.  It’s performance has been spectacular, certainly the last few years. It is up from a little over $10 to $60 in a 4 year period. In the Bigchart it is compared to the XAU, the Philadelphia Gold index of 13 or so major gold producers. They barely moved over that period whereas Franco is up a tidy 300%. Gold itself has done very little over the past year so this stock has outperformed the metal itself and the gold miners. It may have completed 5 waves up, it is now outside its channel  and the technical indicators such as RSI and MACD suggest an overbought condition. We would sell the stock, or at least keep a trailing stop-loss underneath this stock.