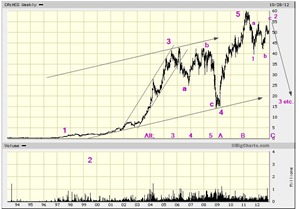 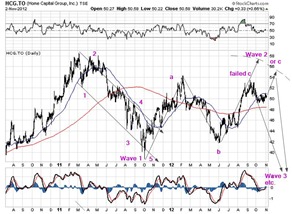 Home Capital Group, an excellent company growing like gangbusters, very profitable and trading at a p/e of about 8%. What is there not to like? The Chart, and this may also apply for similar financial institutions that do not have a chart, simple because they do not operate as a shareholder company.

Looking at the big chart it was either 5 waves up into the high of $60, or it was a B-wave that got the stock up there. Either way the next big move should be to the downside, at least to the trend line at around $25 (see previous blogs). Looking at the more detailed chart a clear 5 waves down occurred mostly in 2011, to be followed by an a-b-c wave 2 that has now lasted 13 months and may not yet be over. The next big move should start soon and take the stock below $41 right away. The important thing to remember is that there is no reason for such a decline. During the great recession this stock lost about 60% of its value for no reason. If it repeats that feat it will drop to about $24 also for no reason, which is in itself a good reason to step aside.