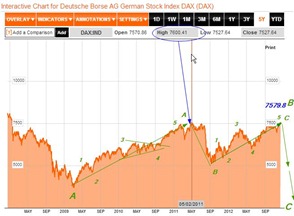 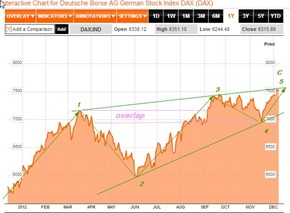 Both charts are the same except that the one on the left is a 5-year chart and the one on the right a 1-year chart. Just to remind the reader, the Dax is a total return index that is not directly comparable to other indices that are compiled on a simple price bases. A few days ago I mentioned that the Dax had made a new high since the lows of the “Great Recession”, this was incorrect and we still have about 20 points to do that.

Clearly, in the big picture, the Dax has traced out an A-B-C rebound and has accomplished very little over the past 9 months. The A-B-C follows the pretty standard 5-3-5 structure in which the C is an exceptionally well formed diagonal (wedge) with the proper 3-wave subdivisions and the usual overlap between waves 4 and 2. Overlap can only occur in this kind of wedge and ergo it follows that it must be one!

The (possible) message to take from this is that like the DOW, the TSX, the FTSE the Dax also sports an overall pattern that screams GET OUT NOW.  The wedge that starts in Sept of 2010 at about 5000 (not shown due to limited choices with Bloomberg charts), has the nasty characteristic that it normally retraces back to the base making 5000 an initial target. However, as A-B-Cs are invariable corrective structures, a drop below the March, 2009 lows should be anticipated.

To put this in perspective we have added the STOXX50. The highest point on this chart (not the index itself) is at about 4600 and the present value is at 2600, consequently this index of the top 50 blue-chip companies from 12 different countries in Europe,  is still down by 41% 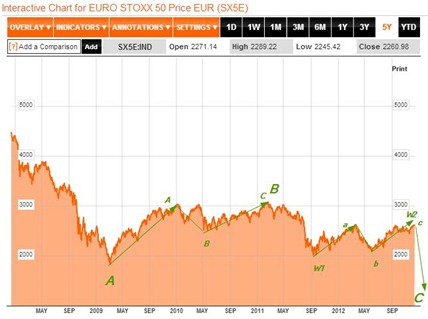 Also shown is the STOXX600, then (June) and now charts; 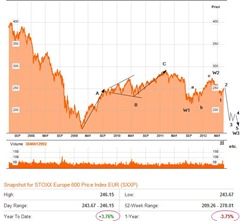 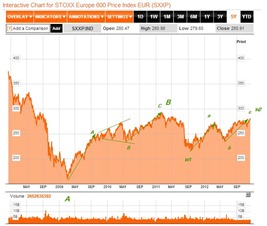 The call was wrong as it did not anticipate the long drawn effects of QEs etc. The damage is minimal in the overall scheme of things.