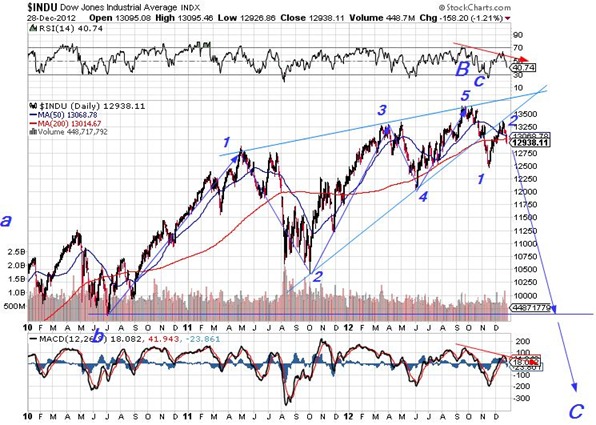 We first presented this idea that a large “diagonal” was forming in August or even earlier. Now that it is complete together with the first wave down and a rebound back to the trend line the pattern truly does look textbook. There are a few important characteristics about the diagonal, wedge, rising flag, pennant or whatever you may wish to call it. First of all it is an exhaustion pattern, that is it always occurs at the end of the ride (wave 5 or c in EW terms). In this case we assume that it ends wave B from the March 2009 lows and has turned. Secondly, invariable these diagonals are retraced in their entirety, that is back to the base (or further!) as a minimum. In this case that should be about 3500 points. Not only does this normally happen, it also tends to happen rather violently. Given the two years plus that it took to complete, it would not at all be surprising if the drop was accomplished in less that 1/2 year. Such a drop would be accompanied by a collective “new” insight that our present pavlovian dog approach cannot yet contemplate.

Fundamentally there are problems galore that remain unsolved. The US spends $1.40 for each $1 that it takes in and despite all the hoopla about the fiscal cliff there is absolutely no conviction anywhere that something needs to be done about it. The European union and the Euro are fraying at the edges but there is no interest at all to cut out the rot. Japan is gradually on it’s way to oblivion given the debt levels and demographics and that is without starting its own Falkland war. China with 46% of GDP coming from “investment” as opposed to consumption is working very hard to set a new world record of capital misallocation that is invariable followed by colossal capital destruction. Canada is oblivious to everything,enjoying a very long period of hibernation.  With all that we do not need the ice to melt or Sumatra to blow up seriously as it did 73000 years ago, it will be self inflicted for the most part.