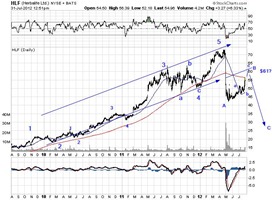 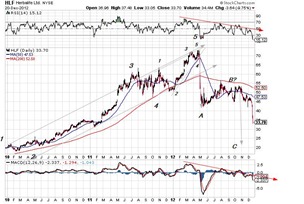 The usual the (July 31) and now charts. Not perfect but close enough. This one is under attack by the same fellow at Pershing Square that “saved” CP. What role is played by this activist hedge fund is not entirely clear as this particular stock (a member of the $7 to $75 club, see previous blog) would probable have done all this without any help. The patterns are usually fairly clear, a gradual but steep rise all on momentum, then a little battle between bulls and bears near the ultimate peak, then the peak and then collapse (Nortel did exactly this).

Last time I took their slogan of their website and put it in the blog. It is all about changing lives by pressing the right buttons, from charity to community participation, from weight loss to healthy nutrition and now also finding a job etc. etc. It is a marketers dream. They come and go all the time. The alleged sin in this case, according to Ackman, is that a very large portion of the 3.5 bln. in annual sales ends up unsold in the basements of their direct sales force. i.e. the success is not so much due to selling as it is (for the moment at least) from recruiting. If true, and the company denies everything, this is the classic formula of a Ponzi scheme. Ackman is not the first to take aim at this company, not too long ago , back in May,  David Einhorn expressed similar doubts about the company. Just to give some reassurance, this company has been around for more than 30 years and is headquartered  in that bastion of probity, the Cayman Islands.