We thought this one was high enough at $41 almost exactly a year ago. We did not get it right but did note that we had a problem figuring out a plausible count That is still a problem. Here are the charts once again; 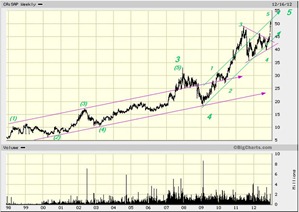 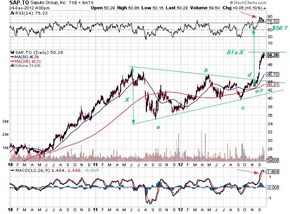 The assumption now is that the entire move up from the great recession is one, single, 5th wave. There is , perhaps, a 4th wave triangle that seems to be missing the e. In any event it is a consolidation pattern that lasts for a year and a quarter and is then followed by the usual thrust. It has now travelled about 62% of the “mouth” and could therefore be complete. If not $56 is still a possibility on account of that particular metric. All other indicators are more overbought than ever before in the last 3 years.

We looked at earnings and revenue since 2002. Earnings are up by (very) roughly a factor of 3x and revenue by 2x. The company regularly buys back its own stock on an ongoing basis. Last year about 200 mln. at an average of just under $41 The company was founded by Italian immigrants in Montreal back in 1954 and obviously has done very well ever since. It is now the largest dairy products company in Canada.   But the stock trades at a not too modest P/E of 26, almost double the market’s. There is either an enormous renaissance going on in cheese eating or this one is a little overdone. A sell, again.