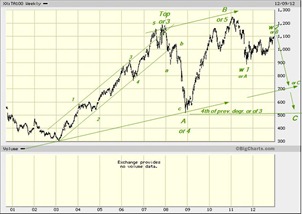 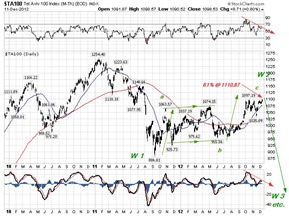 If you look at a number of previous blogs you may have noticed that in our humble opinion the DAX ,the FTSE, the TSX and the DOW could all be on the proverbial cliff. This could be NOW or closer to the year end which is just 8 trading days away. For some reason markets do often turn at year ends (think Nikkei in “89). But just to confirm this possibility it might be worth looking at the Tel Aviv 100 index. There are a good number of reasons to chose Tel Aviv. First of all they are right in the middle of all the Middle East hotspots , the Arab Spring in Egypt, problems in Syria with a recalcitrant ruler and Iran tinkering with atom bombs. Secondly , as a people they are extremely innovative, necessity obviously being the mother of inventions. And , as a people, the are solidly linked to the US, making more than half of all contributions to the Democratic party. All of this presumable leads to a somewhat binary outlook which, one would expect to see reflected in the exchange. Well, think again, here is the TSX; 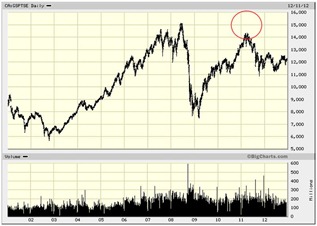 I have calibrated the size the size to be equal to the Tel Aviv chart, this way you can enlarge them and move them around to better compare the two. In almost all respects the two could not be more different. Toronto has none of the fun loving, hedonistic traits of Tel Aviv. We do not expect to get embroiled in a war with any of our neighbours anytime soon and as far as innovation is concerned we are perfectly happy to sit on our laurels  on account of insulin and the Canada arm. Nevertheless the two charts are, for the most part, completely identical (apart from the amplitude of the swings). The Tel Aviv chart is 3 ticks away from a 61% retracement and both the RSI and MACD are behaving badly. The only , minor, fly in the ointment is that wave 1 down is not clearly a 5-wave move but that can be remedied by shortening the first leg and lengthening the last. So, here we have another index that is warning that a smart turn could occur any moment.