We have waited an extra day to make absolutely sure that we are wrong on our prognoses with regard to the DOW. Some might say dead wrong. Whatever the case might be this is the time to figure out what is wrong. Here is the big Dow picture; 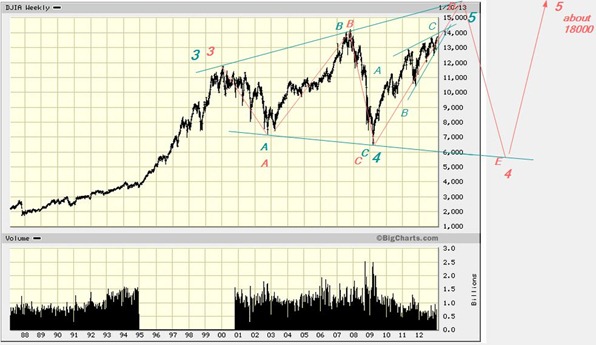 What we show here is a count that some might offer to explain the events of the last few years. We have a large “flat” A-B-C for a wave 4, which is then followed by a wave 5 to new highs. Some might even suggest that  everything in this chart is a single pattern which , in my opinion does not exist in the EW vocabulary. The closest pattern that could fit is that of an expanding triangle from ‘99 onwards. The A-B-C would remain as is and we would now be in wave D that would go to 15/16000 and then wave E would take the index back down to 5500 or so. That would complete wave 4 which should then be followed by a 5th wave to a new high. The expanding triangle would take a total of, perhaps 16 years or so which is not disproportionate to previous corrections. This is shown in read.

We do not think this is the right interpretation. The wave up from the lows of March 2009 simple does not look like it can make it to the level required. Here is the Dow and the Nasdaq; 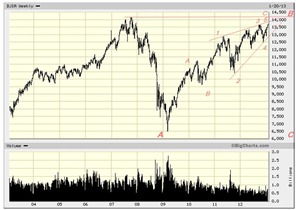 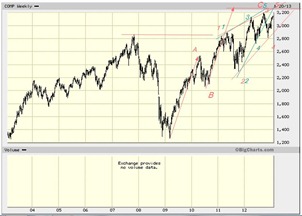 Both display a very clear wedge that invariable is an exhaustion pattern. Neither has done much during the last year so clearly fatigue is already setting in. The Dow is within 250 points of the highs of 2007 and the Nasdaq remains more or less at the 60% retracement level from its 5000+ peak. The wedge may be a little longer than first anticipated but their is no question that it is there. So, for the time being we will stick to the original count, shown below; 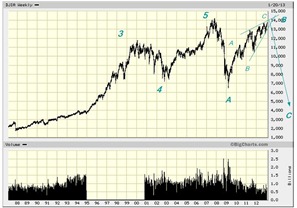