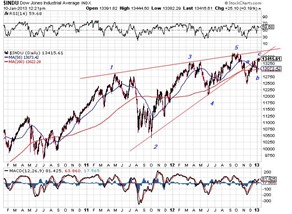 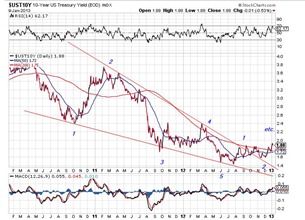 The Dow has behaved in a rather disappointing way by not dropping. But it also has not, yet, negated the outlook and it has followed the other prediction which was that this market will do just about anything to climb back up. With a lot of noise we have now substituted the “fiscal cliff” for the debt cliff with a government that is even more divided than before which , on balance, may have made matters worse.

At the same time the announced additional 40 bln per month, to 85 bln. per month by the Fed has done wonders. Instead of lowering interest rates it has had the effect of raising them by about 30 basis points. This may prove to be temporary but then again it may be the real turn (after 31 or so years). All this with a little help from the Chinese, Japanese and a whole host of others including the Swiss who, by intervening in the currency market (which is the same as easing), have managed to accumulate Euro reserves to the tune of one time their GDP ($600 bln.) Stay bearish until this wedge is proven wrong.