Predicting markets has become rather easy, all you need to do is count the number of days and multiply that by 50 points or whatever and you will know where the market will be at that time. Any problems along the way will be swept under the rug, legislated out of existence or simple ignored by the markets spin machine. But , here is Germany , then and now; 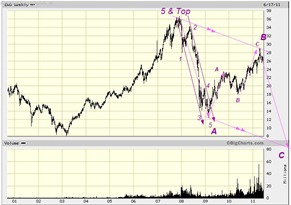 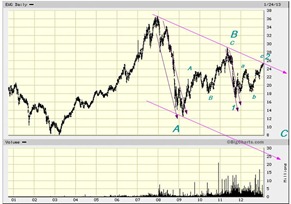 The then is from June of 2011, so about a year and a half ago. Now is now.  These charts show the very essence of Elliott wave. Sequences of 5 waves are always pointing in the then prevailing direction of the market. 3 waves, on the other hand, are always against the prevailing direction or counter-trend. Both the drops in 2008 and 2011 are 5 wave sequences and as such they define the prevailing direction as down. Both A-B-C’s in 2009/10 and 2011 , roughly, are counter-trend, in this case up. The logic behind this is that the human brain is wired in such a way that if we do something we like we take our time doing it. When we are doing something we don’t like we are guided by our “flight or fight” instinct, which is far more crude and abrupt (not necessarily in time but in the complexity of the structure!). So what we have is a main trend down, twice confirmed , followed by two big bounces.

Furthermore the EWG demonstrates the concept of “fractals” very well. This is when similar patterns recur in different sizes (degrees). Here you will notice that the big drop and rebound, from 36 to 12 back to 29, is repeated pretty well in an identical way in the next one from 29 to 17 back to 25. (See also blog on RIM for fractals). Right at this moment we are right on the downward sloping line connecting the three tops; next big move should be down. By the way, on shorter term charts both the RSI and MACD are also pointing down.