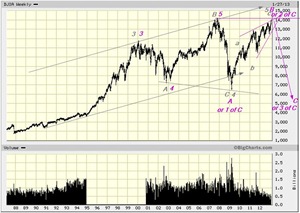 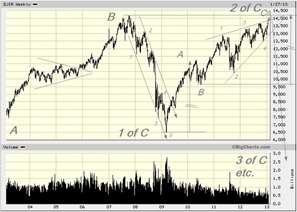 The Dow made it all the way to 14009.8, not quite to the old high in 2007 which I believe was at 14054 or something like that, but close enough to call it a double top. This supposed enthusiasm is fired up again by the Fed. confirming its 85 bln./month liquidity injections, the BOJ promising to do another 10 trillion Yen and both the People’s Bank of China and the Europeans singing from the same page. This is where the fallacy of composition enters into the equation. Here are the Yen and Swiss Franc; 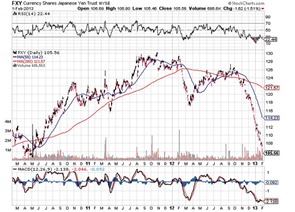 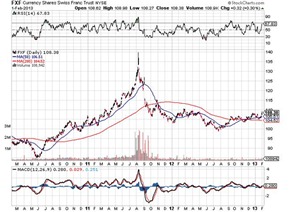 While it is possible for one country to reduce the value of it’s currency by intervention, it is not possible for every country to do so as exchange rates are relative values. But nevertheless these beggar-your-neighbour policies do add liquidity and a lot of it. In the case of the Swiss, an amount in excess of their annual GDP!

All of this has led the “market” to believe that some kind of seismic rotation is occurring. The narrative is that people are selling bonds and buying stocks. That such nonsense can even take hold is a measure of the stupidity and gullibility of the “market”. While you might be able to sell bonds and buy stocks, or your neighbour, or I, collectively we cannot do that. Not a single cent will flow from bonds to stocks, as for each buyer there must be a seller and therefore there is no flow even if the values might change. What has, however,  been going on for years now, is that the cost of debt financing relative to equity financing has become  much cheaper than it used to be (due to lower interest rates and lower corporate taxes). As a result companies will issue new debt, buy back their old stock and then cancel it. Essentially the same thing occurs where there are stock buy-backs. On balance then the stock of bonds actually increases – so the value goes down –, and the stock of equities decreases –so the value goes up. Exactly what is happening, see then and now charts below; 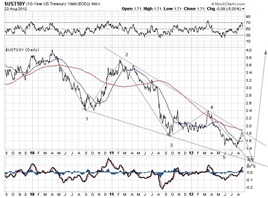 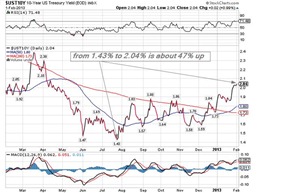 In fact , a little earlier than anticipated and quite violently as well, given the 47% increase in interest rates at least half of which occurred after the Fed’s announcement of QEforever.

Obviously the Dow is at a critical juncture. As explained earlier the actual top could be any one of the three. Looking at other indices it is possible to argue that the one we are presently making, or even the next one, is THE top. 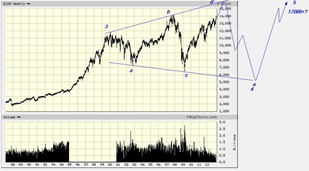 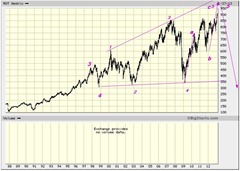 This would be the case if the Dow had been tracing out an expanding triangle starting in 1999 and still unfinished. The transports and the Russell 2000 are in line for that interpretation. The Dax is triple topping as we speak and could have immediate bearish implications. In short, there is a lot of fun ahead.